Showing posts from June, 2010
Show all

Small is beautiful in Alaska 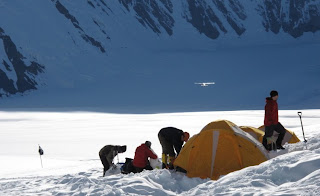 The West Buttress, Denali's voie normale , is a gorgeous hike at altitude. Between dragging a sled to the 14k camp and jetting to the top from there, my lungs and legs got a good workout. But the climbing muscles, the arms and the head, were left wanting. As soon as we returned to Kahiltna basecamp, I started scoping around for a partner. It did not take long to find one. Joel Kauffman ( http://joelandneilsclimbingblog.blogspot.com/ ) had bumped over to the Kahiltna from Little Switzerland a few days earlier, and was game for some steeper fun before flying out. We decided on Bacon and Eggs on the Mini-Mini-Moonflower, a route my friend Eamonn Walsh and Mark Westman put up a couple of years earlier. A typical Kahiltna basecamp scene. From the left: the Mini-Mini-Moonflower, the Mini-Moonflower, and the real thing. Mini-Mini-Moonflower's  Bacon and Eggs Vegetarian Couloir on the left, and Mini-Moonflower's North Couloir on the right. It being already June, it got quite h
Post a Comment
Read more

Denali: A walk in the sky 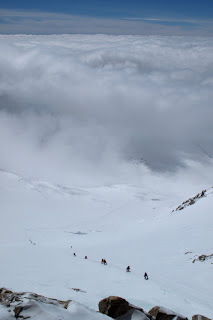 It is almost nine and the sun is high in the sky by the time I finally extricate myself from my sleeping bag. I eat a leisurely breakfast and leave the 14k camp at ten thirty. Unlike in most mountain ranges, predawn starts are not needed in Alaska in June. Daylight is not a consideration, only temperature is. This can mean climbing at night low down to take advantage of the cold, and the other way around high up. My pack is pleasantly light: two litres of drink, some bars, a parka, a spare pair of gloves, and a camera. Sweat fogs up my sunglasses and drips from the tip of my nose as I push myself up a sunlit snow slope toward the Headwall. It is a relief to have to slow down on the forty-five-degree snow and ice, all the while scrupulously avoiding touching the fixed lines. As a sport climber I have a horror of pulling on gear. At the ridge I turn right and follow the crest to the 17k camp. I thoroughly enjoy this section of the route: travel is easy on the styrofoam snow, the angle is
Post a Comment
Read more 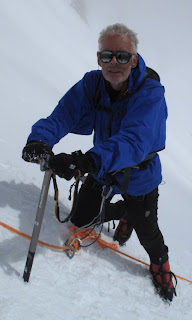 A few days ago I got back from the Alaska Range. My father Andre and I spent a couple of weeks on Denali, trying for a family ascent of the West Buttress. Andre, who is in his early seventies, has been climbing for over fifty years. Starting in the Polish Tatras, his mountain travels have taken him to Nepal, South America, and of course all over the Canadian Rockies. He started me on my climbing journey, and I felt fortunate to be able to go up north with him. Andre on the West Buttress of Denali. Glacier plane, clouds and Foraker. We went through the usual ritual of a Denali trip: fly to Anchorage; realize that it does not get dark at that latitude in late May; go on a massive food shopping spree; drive to Talkeetna; get issued a Clean Mountain Can by the rangers; and finally fly to the southeast fork of the Kahiltna Glacier; all of this in less than forty eight hours. The weather was absolutely spectacular. This was my third trip to the Alaska Range, but only the first time I saw
Post a Comment
Read more
More posts