Showing posts from August, 2012
Show all

What's in a redpoint? 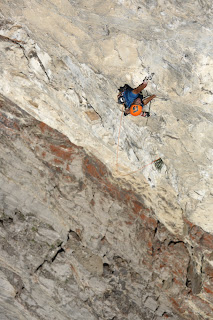 It was arguably Kurt Albert who first introduced the redpoint concept: the notion of continuously climbing a route from bottom to top without grabbing or hanging on protection points (yes, it's still aid even if you just rest on a piece of gear). The story goes that he would paint a red X on a fixed piton he was able to eliminate as a point of aid. Once he had eliminated all aid from a route, he would paint a red dot at its base. For a while more colours entered the picture, but these days only people with old lycra tights in their closet know the difference between a redpoint and a pinkpoint (at least where sport climbing is concerned - trad is a different matter). Kurt Albert's 'rotpunkt' idea makes it pretty clear what it means to free a single-pitch route. But what about multi-pitch climbs? Alex Huber was influential in clarifying just what it meant to free a long route when he applied the ethics evolved on the limestone of the eastern Alps to the Salathe Wall
Post a Comment
Read more
More posts