Showing posts from March, 2012
Show all

Of horseshoes and hand grenades 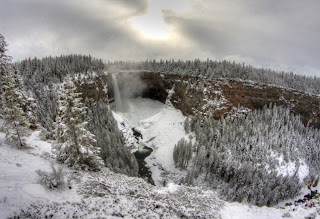 It's good to end a climbing trip with some business still unfinished. It gives one the excuse to dream, to train, and to go back. Where the spray cave behind Helmcken Falls is concerned, given its potential for serious fun, it's hard to see how one could ever tie up all loose ends. All the same, walking out of the canyon at the end of my first visit there, I could have definitely used another day - or three. Take the enduro pitch of Wolverine for example: only a few metres left of Spray On, but without the kneebars, stems and solid ice of the latter, it felt noticeably harder. As I watched Klem Premerl and Tim Emmett figure out intricate, powerful sequences through the initial roof, I didn't think I would stand much of a chance on it. But after an afternoon of trying out the tool matches, stein pulls and deadpoints for myself, the wolverine turned into more of a honey badger : still nasty but not completely unreasonable. And so when on our last morning in the cave, before
1 comment
Read more

Give me convenience or give me death? 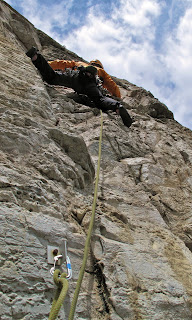 While the climbing world at large was distracted by the controversy over the chopping of Maestri’s bolts on Cerro Torre by Kennedy and Kruk, another bolt-related spat gripped the Bow Valley. The Rockies' version went the other way, however: rather than bolts being removed from an established route, they were added to one. Let me explain. Evan Thomas Creek is a popular intermediate ice climbing area. The main attraction is a trio of neighbouring two-pitch routes: Moonlight , a nice solid WI4; Snowline , a soft touch WI4; and the ugly duckling, 2 Low 4 Zero , a scrappy M4. While climbers would queue up for Moonlight and Snowline , 2 Low 4 Zero saw little traffic. There was a reason for it: in spite of the moderate grade, when thin 2 Low 4 Zero was a serious lead on marginal gear. Enter Pat Delaney and Mike Trehearne, two local guides, who decided to remedy this situation by retrobolting 2 Low 4 Zero up to Haffner Creek standards. Their stated reason was to open up the route
16 comments
Read more
More posts