Showing posts from November, 2012
Show all

The Ghost in the Machine 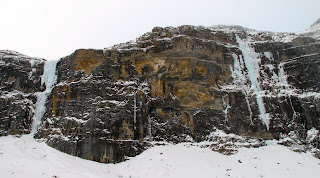 In the end, what's climbing about? Gymnastics? Or exploration? I suspect everyone will answer differently, and maybe even differently at different times. For example, I spent most of September projecting a single route at the Lookout. Each day at the crag was much the same as the previous one: I'd warm up, get on my project and try to work it into submission. While I did make some discoveries along the way (such as that it's better to hand-wrap rather than crimp the hold at the start of the first crux), I'd be hard pressed to call what I was doing exploration. Instead, I was essentially perfecting a gymnastic routine, so that I could eventually execute it error free. On a warm afternoon in late September, with the aspen turning yellow in the valley below, I surprised myself by floating the route almost effortlessly. I haven't been back to the Lookout since. Instead, as the days have grown shorter and shorter, I've been waking up earlier and earlier,
Post a Comment
Read more 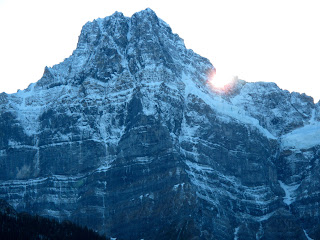 Jon and I left the city on Friday afternoon, escaping for the Thanksgiving long weekend along with thousands of others. The Rockies stretched across the western horizon under a pale autumn sky. It was already two weeks past equinox, and there was a sharpness to the air that told of changing seasons. Two weeks earlier I’d hiked into the Emperor Face in shorts; now I hurriedly pulled on long underwear as we packed for the coming days in a gravel parking lot beside the Icefields Parkway. The sun had already disappeared behind the summit of Howse Peak, and any illusion of warmth fled along with it. It was a relief to be done with the finger-numbing packing and cooking, and to crawl into the back of Jon’s van for a few hours’ sleep. We were up long before dawn. Muesli, a thick slice of banana bread, a shot of stovetop espresso, and we were off up the trail, stumbling over roots and crunching through frozen puddles. At Chephren Lake the broad hiking path gave way to an intermittent climbe
1 comment
Read more

Winter's coming. A gorgeous indian summer ended abruptly a few weeks ago with thick snow falling on yellow leaves still clinging to branches. It was time to shelve projects at the Lookout until next spring and to start scratching up snowed up rock; time to experience the mountains in their wintry guise.  Last Saturday night Jon and I bailed from yet another attempt on a big new mixed line. All day clouds of spindrift engulfed us at regular intervals, turning something as simple as rummaging inside the pack at a stance into a carefully timed operation. After five rappels by headlamp we finally touched down on a steep snow slope. Our approach tracks were all but obliterated, erased by heavy sloughs from the wall above. What two months ago was scree crisscrossed with sheep tracks had suddenly become ominous avalanche terrain. After postholing back across gully after lee-loaded gully, we breathed a sigh of relief upon finding ourselves again among dense, friendly trees. Winter had ind
5 comments
Read more
More posts