Showing posts from June, 2013
Show all

In praise of April 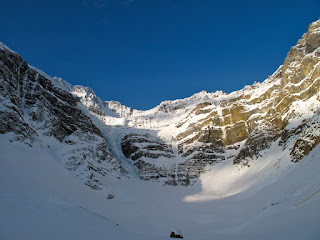 “On the street where I live Every day is garbage day,” sang Montreal sludgeabilly rockers Deja Voodoo back in the eighties. Luckily on my street only every Tuesday is garbage day. Still, the seasons might come and go, but every Monday night without fail I roll out the black and blue bins into the alley behind my house: swatting at mosquitoes one month, pushing the bins through deep snow another. On a Monday evening in early April a light snowfall had blanketed the city. The previous week’s unseasonal heat had melted much of the winter’s snowpack, and bare ground and yellow grass showed through the thin white caul. As I was rolling out the bins, I bumped into my next-door neighbor. “This is terrible,” he blurted out, meaning the snow, not the garbage. I’m afraid I found it hard to be sympathetic. Sure, winter’s return meant going back to the gym after a couple of days of climbing in a t-shirt at the Lookout, but it also meant good skiing in the hills. And so there was more than a l
Post a Comment
Read more
More posts