Showing posts from September, 2013
Show all

You can't always get what you want 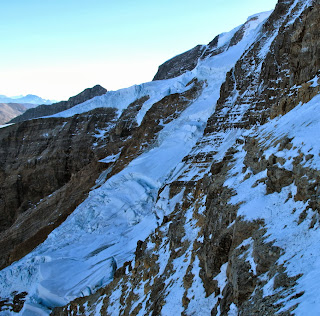 A year ago J. and I made the long drive from the Bow Valley to pay a visit to the King of the Rockies. On a crisp, cloudless late September day we climbed Infinite Patience on the Emperor Face, bivied high on the Emperor Ridge, and continued up the gargoyles to Robson's summit in the morning. It was a nearly perfect alpine climbing trip. After all, how often do we get to run up a line on one of the Rockies' biggest faces without dodging a single falling stone? And how often do we get to spend a windless evening camped right on the spine of the mountain. and to top it off, climb squeaky neve up and down and around the feared gargoyles? But however much we get, we always want more. While climbing Infinite Patience, I kept stealing glances toward the centre of the face. There, cutting through a sea of snow-covered rock, a slanting ice couloir beckoned: the line of the Cheesmond-Dick route. The following day, while walking the highwire of the upper ridge, I looked down ribbons of
Post a Comment
Read more
More posts